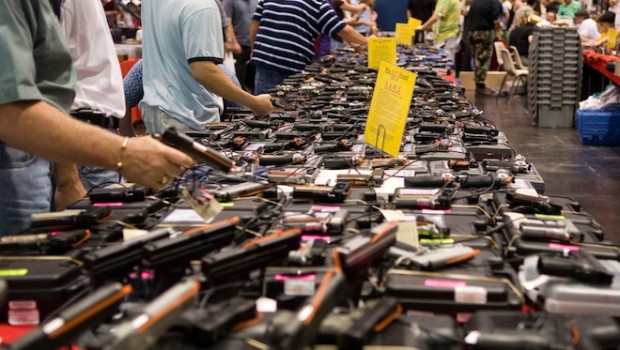 Growing up in in an urban neighborhood in a city that prides itself in its Western heritage, guns were everywhere.  There were guns in nostalgic photographs, actors dressed as cowboys with guns hanging from their hips at every rodeo show, guns on the back of pickup trucks headed to the county for hunting, and guns tucked carelessly beneath baggy shirts and jackets.  Gun ownership was a lifestyle, as common as car ownership.

So, I am not afraid of guns.  But, I am afraid of the wrong people doing the wrong things with guns.

Recent killing sprees and tragic deaths at the hands of a few people with deranged intentions have caused a riptide of knee jerk reactions towards gun ownership.  Crazy extremist are calling for a complete ban on all private ownership of guns. Radical anarchists are bunkering down as if preparing to become martyrs for machine guns.

Despite the extreme and radical notions about guns, I think everyone would agree that some regulation of gun ownership and possession is warranted. After all, no one wants to see a blind man carrying a gun any more than they want to see a blind man driving a car.

But the recent headlines surrounding the ruling on Friday by the 10th U.S. Circuit Court of Appeals, which are boldly stating that “permits allowing people to carry concealed weapons are not protected by the 2nd Amendment,” are really rocking my world.

To clarify, it is the headlines and not the court ruling that have me upset.

When my mail box was inundated with outraged emails forwarding article after article from one trusted news source after another each blaring the same rant on the supposed destruction of the 2nd Amendment, I had to stop and read the entire ruling for myself. I was shocked and delighted to find that the headlines had completely missed the point on the actual ruling by the 10th Circuit Court of Appeals.

Contrary to what the blazon headlines would suggest of the court, the 10th U.S. Circuit Court of Appeals ruling in Peterson v. Martinez, No. 11-1149, 23 (2013) was filled with quote after quote, of the virtues espoused by the 2nd Amendment on the right to lawfully carry guns, such as:

This is the right guaranteed by the Constitution of the United States, and which is calculated to incite men to a manly and noble defense (sic) of themselves, if necessary, and of their country, without any tendency to secret advantages and unmanly assassinations.

If the 10th U.S. Circuit Court of Appeals had ruled in favor of the plaintiff, the ruling could have set a legal precedent that a citizen issued a license from one state could use the US Constitution to challenge the laws of another state. For example, if the ruling had been different, a smart lawyer could potentially argue that some part of the US Constitution would allow a man issued a marriage license to marry another man in a state like Hawaii forced states like Texas to recognize the license in order that the men could marry in front of the Texas State Capital.

The law is simply not to be used in a vacuum focused on only one particular issue at a time.  The law is encompassing and one area of law often carries over to another area of law that would seemingly affect our lives in many different ways.

The Plaintiff from Washington in the 10th U.S. Circuit Court of Appeals, who wanted Colorado to issue him a concealed handgun permit, made the same miserably mistake that so many people make and hired an attorney, who by his very nomenclature was fired up to simply run to a courthouse to solve ay little issue, when he would have done better to consult with his lawmaker to attempt to revise the laws of his state of Washington to allow mutual reciprocity with Colorado.

Let’s face it; sensationalized headlines over the gun control battle have only accomplished one thing – make the sale of guns in the United States skyrocket.

And, for anyone concerned about the issue of the Federal government completely banning the ownership of guns by individuals, take heart to the ruling in United States v. Alfonso Lopez, Jr., 514 U.S. 549 (1995), where the US Supreme Court expressly ruled that the commerce clause did NOT allow the federal government to limit the carrying of weapons where there was not a showing which evidenced that the activity sufficiently affecting interstate commerce because the central issue was “private conduct” by an individual.

So, can we stop wasting time debating the lawful carrying of guns, concealed or otherwise, and start talking about lawful way of protecting ourselves from the people who walk around with guns tucked beneath baggy shirts and loose fitting jackets for no other reason than to break the law?

About the Author: Nachael Howell Foster, a graduate of the George Washington University Law School and Duke University, is a licensed practicing corporate attorney.  When she is not advising small to medium size businesses on matters ranging from intellectual property, she writes and lectures on the value of law to all aspects of Americans lives.  Nachael has three daughters and three dogs, so Nachael’s World is always fun, straight-forward, and informative.  You can read more about R. Nachael Howell Foster at http://nachael.wordpress.com/