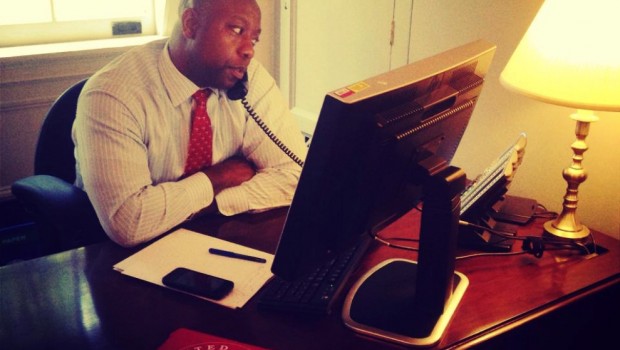 Tim Scott’s appointment to represent South Carolina in the US Senate has been met with a notable skepticism from most African American commentators, with Adolph Reed’s essay in the New York Times and Jamelle Bouie’s column in the Washington Post providing articulate examples of a common theme: that Scott’s status as a strict fiscal and social conservative means that he will be an impediment to black economic interests as well as the socially liberal agenda that most African American intellectuals have embraced; and that the selection of Scott is an empty and false token meant to prove a Republican inclusiveness that does not exist.

To be sure, Scott’s ascension is the polar opposite of the kind of racial breakthrough that the same critics have fantasized about. When Scott stands for election in 2014, he will depend on the conventional alliance of white suburban and rural conservatives that sustains the GOP’s hold on the Deep South, as opposed to the coalition of blacks and metropolitan whites that liberals assume as a prescription for the election of a black candidate to statewide office. In blunter terms, Scott’s win would mean that he had reassured voters who hold the prevailing right-leaning views in his state that he is one of them, and of a piece with their vision of limited government and traditional cultural values, as opposed to the ideal progressive pathway of convincing those voters to rethink their mindset.

But regardless of the reservations on the left, Scott’s victory scenario is likely the only kind of African American electoral win in the Deep South that is conceivable at this point. In the parts of the region (Alabama, Louisiana, Mississippi) where the Democratic share of white voters has slipped to the upper teens, and even in the slightly less polarized areas of Georgia, South Carolina, and Tennessee, not a single one of the seven black Democrats who hold congressional seats are regarded as plausible statewide figures. Only Atlanta’s Mayor Kasim Reed, a pro-business moderate, is regularly cited as a prospective black contender for a governorship or a Senate seat, and it is worth noting that the last two black Democrats nominated for Senate seats in Georgia have hovered around the 40 percent threshold.

So, as Adolph Reed’s essay concedes, to shortchange Scott is to more or less write off the ideal that racial diversity is a political value in its own right, as well as the more specific notion that it is a sign of progress in the Old Confederacy that its statewide leaders include the descendants of the slaves who were once dehumanized there. Certainly, progressives can make a case on their own ideological terms that the conundrum of poverty and educational inadequacy in the South would be better solved by a politics very different from Scott’s. But it is hard to argue that the still rigid lines of demarcation in the South, which leave blacks in very few leadership positions outside their own community or cities where they hold a large share of the voter base, aren’t a danger sign in their own right. In a part of the country where data suggests that whites still manifest the ugliest stereotypes about African American capacities, racially exclusive leadership does seem to simultaneously reflect and ratify those stereotypes. Consternation at this pattern has certainly driven local black interests to demand more of a presence from corporate boards to school principalities to football coaching slots to university administrative ranks.

To run away from that goal of shattering glass ceilings ionly in the context of politics, or to amend it to conclude that one kind of black is worthy of cracking the glass, another less so, has a deeply cynical feel to it.  So does the innuendo that Scott is a lightly qualified mediocrity who is profiting from his party’s penchant for cheap symbolism. Scott’s PR virtue, which as Michael Steele has pointed out, is next to nothing outside his state (neither the elevation of Colin Powell, Condi Rice, nor Clarence Thomas to high office have had any measurable impact on GOP performance with blacks) arguably had much less to do with his appointment than his skill at networking within the intricacies and rivalries of South Carolina’s notoriously fratricidal politics. Or the political talent that enabled him to fend off both Strom Thurmond’s grandson and the son of a popular former governor in the 98 percent white primary that won him his congressional seat.

Scott’s career may unfold in a variety of ways. He may continue the trend of his one term in the House, where he tracked to an orthodox party line on virtually every issue and was not distinguishable from other Tea Party backed members of the 2010 class. Or given the much more substantial profile as the nation’s only black senator, he may make a foray into territory that Republicans desperately need to cross, like income stagnation, education reform, or the development of a strategy to reverse poverty rather than subsidize it.  Either path is defensible given the sensibilities of the constituents he will be representing. But the virtue of Scott’s rise is that three quarters of those constituents still see precious few South Carolinians who are black inside their gated communities, or teaching classrooms in their children’s often private schools, or resolving their loan applications at the bank: beginning in the new year, they and their children will see someone who, in the popular parlance, does not look like them speak for South Carolina in the world’s greatest deliberative body. That is progress in its most inspirational form.

One Response to Tim Scott’s Rise