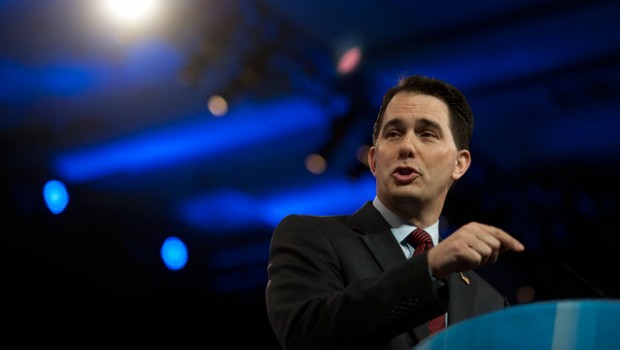 The (Republican) Case Against Scott Walker

Wisconsin Governor Scott Walker is trying build on his success in a solidly blue state to pitch himself as the most electable candidate in the GOP primaries. Instead, the Walker campaign demonstrates why the GOP’s current posture has eliminated it from national relevance. Walker is probably the most electable potential Republican nominee and he would almost certainly lose his home state – and the election, to any warm body the Democrats select. Walker illustrates the challenge of the Blue Wall.

The Blue Wall gets its power from a single political phenomenon – the conversion of the former slave and Jim Crow states from single-party Democratic rule to single party Republican rule. Freed from their historical ties to the Democratic Party, a fresh generation of Neo-Confederates has found new room to operate inside a far weaker political organization. In their new home inside the GOP, Neo-Confederates are now dictating terms instead of accommodating.

This has given Republicans in the old Jim Crow belt tremendous new local power, but it has converted the Republican Party into a regional force with little or no national appeal beyond aging whites. Success for northern Republicans in state and local races depends on two factors. First, the template of relevant issues is much narrower than in national races, meaning voters are sometimes willing to tolerate or ignore otherwise unpopular positions. Second, candidates in state and local races can often establish a safe distance from the positions of the national party. Those two criteria are impossible to meet in a campaign for the White House.

In Wisconsin, for example, Walker built his appeal on his willingness to break the smothering stranglehold of public employee unions on state and local politics. For all the noise on the issue nationally, that position has always been a winner in Wisconsin for very good reasons and it remains a winner today. That is a purely regional concern that voters in Missouri or Nevada or Texas likely do not even comprehend.

Walker’s first campaign tried to conceal his social conservatism, downplaying abortion and other issues. Voters were keen enough to see reforms in state government to roll the dice on social issues, betting that there was little harm he could do. Despite taking some extreme Tea Party positions, voters have stuck with him by a narrow margin out of fear that a loss by Walker would undo the valuable work he has done. Polls are making clear that those voters are not willing to tolerate his far-right positions in a role as powerful as the White House. Truth be told, after what he has tried to do to the state’s flagship university, they probably wouldn’t return him to another term in the Governor’s office. He’s finished.

Walker trails Clinton in Wisconsin in a hypothetical matchup by double-digits. Yes, the election is a long way off, but it is difficult to imagine what might change. Wisconsin voters experienced three low-turnout elections with Walker and their buyer’s remorse is rising. Hillary Clinton is probably the most thoroughly-vetted public figure in modern history. There is nothing left to learn about her. Wisconsin voters have made up their minds and are unlikely to shift much on this issue in a year, or a decade.

Walker has never won more than 1.2m votes in Wisconsin. Obama won 1.6m in both 2008 and 2012. In a high-turnout election he has absolutely zero possibility of taking the state. And by the way, the state’s Tea Party Senator, Ron Johnson, who won election in an off-year, already trails his most likely rival by a huge margin. It is virtually inconceivable that he can hold his seat in Wisconsin in a Presidential election year.

Republicans are not going to reverse our decline in national relevance without addressing the forces behind the problem. The party has fallen captive to a Neo-Confederate agenda driven by the counter-civil rights movement. Talk all day about taxes or war or trade or any other issue, as long the party is chained to a core of bigotry, whatever else we build around that core will be tainted.

Want to build a more powerful, more vibrant, more optimistic Republican Party that can dominate our politics for a generation? Start with a good hard look at what happened in Indiana with the Religious Freedom Restoration Act. If you need evidence to demonstrate the scope of the problem, take a good hard look at the career arc of Governor Scott Walker. Ronald Reagan was the last Republican nominee to carry Wisconsin. Walker will not be the next one.