THE LOSS OF INNOCENCE : a film review by Cleo E. Brown

In HOLY HELL, filmmaker Will Allen, tells the story of a West Hollywood Cult named Buddhafield led by the charismatic and enigmatic Michel. Will Allen captures more than twenty-two years of footage as he struggled to find himself in God’s eyes through the spiritual leadership of Michel; only to be sourly disillusioned because Michel was eventually revealed to be a mortal man and not a god. Produced by Allen, Tracey Harnish, Alexandra Johnes, Michael C. Donaldson, Juliana Goldstein, Jared Leto and Cheryl Wheeler Sanders in conjunction with Very Special Projects and Whitewater Films, HOLY HELL had its world premier at the 2016 Sundance Film Festival. The Documentary will debut on CNN on Thursday, September 1st at 9:00pm and 11:00pm Eastern Time. HOLY HELL will encore on Saturday, September 3rd at 8:00pm and 10:00pm. HOLY HELL will also stream via CNNgo and will be available after the premiere on Demand via cable, satellite systems and CNNgo for subscribers.

The most striking aspect of HOLY HELL is the breathtaking photography contained within the documentary. The footage takes us back to a more carefree, untroubled time in life when people were able to frolick in the forest and play in the water with the careless abandon of children although they were adults. The second most striking aspect of the film is Buddhafield’s leader named Michel. Michel, on a superficial level, related to his flock as a parent to a child. Although The Jim Jones People’s Temple Cult is not discussed in the film, the example of The Guyanan Cult existed to warn the followers of Michel of the dangers of believing in a man to the extent that the man was deified. Buddhafield followers did not heed the warning. Eventually revealing that the god-like Michel, who disdained physical sex, was a hypocrite coercing both money and sex from his male disciples as well as engaging in the emotional abuse of both sexes, the movie on a deeper level paints a portrait of a con-artist and charlatan who, through his use of brain-washing, robbed hundreds of people of their youth, their innocence, their children and their money.

Unique is the film’s ability to follow the cult and cult leader from Hollywood, California to Austin, Texas to Hawaii as Michel, whose given name had been Jaime Gomez Parra, shed identities with each move to throw the wary off of his track. This film also contains footage of Michel engaged in sex acts from pornographic films he had been rumored to star in. Surreal, detail oriented, non-judge mental and fair, while hard-hitting and honest, this film is a must-see for all parents who want to safe guard and protect their children from the Michels of this world.

The only weakness of the film is its maker’s unwillingness to compare Buddhafield to other cults of the late twentieth century so that we, the viewer, may gauge Buddhafield through the continuum of cult cultures from the seventies throughout the nineties. I rate HOLY HELL, therefore , on a scale of from one thru ten, a 9+. 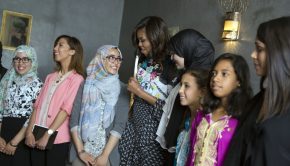 Film Review – WE WILL RISE, The Realities of Life →

The Price of Greatness: a film review of Steve Jobs: The Man In The Machine →