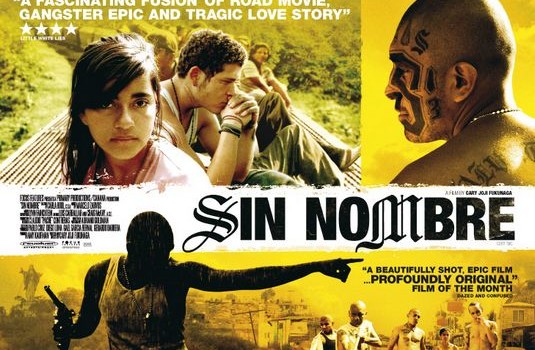 In Sin Nombre, Sayra (Paulina Gaiton) and El Casper (Edward M. Flores) join forces to battle the ever present and far reaching hand of the Mexican gangs.  First and foremost, this is a film about gang violence.  On a secondary level are the subplots of child abuse and the corruption of youth as told through the eyes of Benito (Smiley).

Third, however, is the theme of immigration to the United States and what the promise of this dream means for Sayra, the members of her entourage (her father and her uncle), and for El Casper.  Beautifully filmed by Adriana Goldman as well as well directed by Cary Joli Fukunaga, who also wrote the brilliant script, as we watch the story of El Casper’s involvement in a gang called El Mara, Fukunaga contrasts Sayra’s journey with her father and her uncle across the Latin American Countryside from Honduras to The Mexican Border.

Unable to tolerate the second-in-command of El Mara any longer, El Casper leaves the gang to run away to The United States with Sayra and her family.  The issue of  “illegal immigration” is not explored in this powerful film.  What we are consequently treated to, therefore, is the idealistic viewpoint of Latin American Immigrants to the United States who perceive of, in The U.S.A., a Utopia of sorts.

The question then becomes one of the fairness of restrictions against immigration to the United States by Latin Americans.  Are these restrictions fair?  Are they race-based?  Should restrictions against any group of people, but especially against our South American neighbors, be in place when the history of the United States is mired in centuries of immigration from groups of people from all over the world?  Interwoven throughout the script is the reliance which we all have on numbers to live our lives.

Numbers are endless; numbers are useful; numbers can be potentially powerful; and for Sayra, El Casper, and Benito numbers prove to be invaluable tools with which to live their lives.  As compelling as the direction and the photography are, Sin Nombre is edited equally as well by Luis Carballar and by Craig Mckay.  The Musical Supervisor is Lynn Fainchtein.

Although the film uses subtitles which are displayed too rapidly to read in some instances,uses frequent obscene language, and extreme violence is depicted (rape, murder, mutilations, armed robbery, and savage beatings) Sin Nombre is a first-class film worthy of the honors bestowed upon it thus far.

The day I hung out at Prince’s house, talking fame, disguises and Michael Jackson’s death →

Joseph Hunter: Some Notes on Music →

Gov’t Tried to Shut Down Rap in Straight Outta Compton, and They’re Still Doing It. →