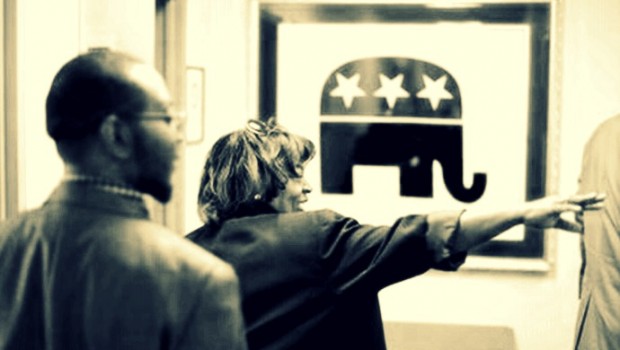 Unlike the Republican National Committee (RNC), our national party apparatus, most of the 50 state party committees are stuck in the 1960s when it comes to the Black community. Exhibit A for this was the annual weekend gathering for the Republican Party of Virginia (RPV) that took place two weeks ago in Dulles, Va., about 25 miles outside of Washington, D.C. This is a gathering where all the powers that be from across the state gather to plot future strategies that will move the state party forward.

I used to be intimately involved in these annual gatherings, but over the years found them to be increasingly a waste of time. The state party would always invite me to participate or moderate a panel on “minority outreach.” The panels always turned out to be more talk than action. In the 90s, I was elected statewide to be national committeeman of the Young Republicans Federation of Virginia, the first and only Black to ever win this office. In that position, I traveled the state talking to anyone who would listen about the imperative of getting more Blacks involved in our state party. Suffice it to say that Virginia’s moniker of being the “cradle of the confederacy” is well deserved.

Despite the lack of interest by the Republic Party of Virginia in the Black community, Virginia has a long history of statewide elected officials who talked, lived, and breathed real diversity. We had governors such as Jim Gilmore, George Allen, Lt. Gov. John Hager, and Attorney General Mark Earley. They not only earned north of 25 percen7 the Black vote, they had paid Black campaign staffers; and had prominent Blacks throughout their administrations. These Blacks were placed in decision-making positions and were not just window dressing.

The state party never institutionalized what these office holders put in place, so since these guys left office in the early 2000s; we are always starting from ground zero with the Black vote, as opposed to building on what was previously done.

So, I couldn’t help but laugh at some of the comments being reported by the media about our gathering two weeks ago.

According to the Washington Post, “Virginia Republicans are launching a major new strategy to start winning statewide elections again with a concerted effort to engage minority voters and unify the fractured establishment and conservative wings of the party.

As one of the speakers at the gala dinner, Gillespie urged the party to build on gains his campaign made with African American, Hispanic and Asian American voters over the next four years.”

The only problem is there was absolutely no substantive engagement with the Black community during this year’s elections in Virginia. I consider Gillespie a friend, but I am totally unaware of any professional political operatives who worked on his campaign staff or served as a consultant. If you want to know where a person’s commitments are, have them open their checkbook and see where they spend their money.

Notice there was no mention of the Black vote? According to updated (2013) U.S. Census data: Blacks are 19.7 percent of the population in Virginia (Hispanic s are 8.6 per cent, and Asians are 6.1 so where do you have the best potential for a return on every dollar spent? Duh, it’s the Black vote.

According to the latest U.S. Department of Commerce, Blacks own 9.9 percent of all the businesses in Virginia (Asian 7 percent, Hispanic 4.5 percent). Again, the Black community provides the best possible return on investment.

Mark Obenshain, how many Blacks do you have on your current senate staff? How many Blacks did you have on your campaign staff last year? The Obenshain name in Virginia politics is like the Kennedy name in Massachusetts. He has been around politics his entire life, so his ignoring the Black vote is harder to accept. The irony of all the money that was that all the major speakers were White. There was not one Black speaker at an event where the party was talking about wanting to engage more with the Black community. As the old folks used to say, “their actions speak so loud I can’t hear a thing they are saying.”

About the Author: Raynard Jackson is president & CEO of Raynard Jackson & Associates, LLC., a Washington, D.C.-based public relations/government affairs firm. He can be reached through his Web site, www.raynardjackson.com. You can also follow him on Twitter @raynard1223.