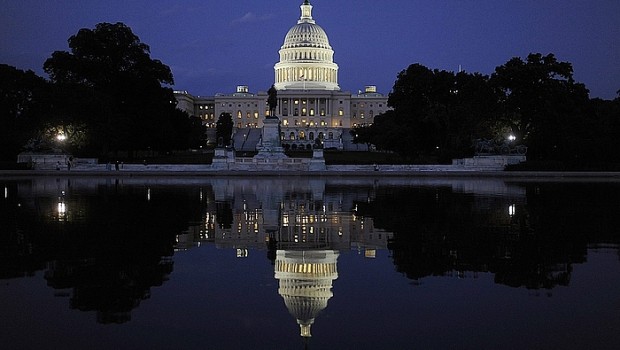 Putting the Sequestration Laws Into Focus

This morning as I tried to prepare my daughters for school, the whole debate over the federal sequesterian crisis flood into its proper focus.

Each of my three daughters attends charter schools where they usually have to wear uniforms each day. On a normal day, my life is relatively simple, for a single mother of three tween age girls. I wake up and pick out one pair of beige pants for each child and one school top, respectively.  Usually, the biggest dilemma is whether or not I have able to correctly discerned the right size top, as I sort thru the closets still half asleep at 6 am.  But, today was different.

Today, my daughters had picture day and were free to wear the clothes of their choice to school.  After an hour of debate and a mountain of discarded outfits laid out on the floor, my oldest daughter announced that, “We’re lucky that we don’t go to a regular school because we would have to wear the same top like twice in a month!”

My daughters have big hearts and can be very generous.  Looking at the mountain of discarded clothes on the floor, my daughters even volunteered to pick up the clothes and put them in a bag to give to the less fortunate children. Of course, the gesture of good will was occasioned on the desire to replace the discarded clothes with new clothes — all courtesy of mommy’s limited budget.

Every household has some sort of budget.  Some households may rely on credit cards or loans to fill in the gaps between the amount of money coming in and the amount of money actually spent. But, the truth of the matter is that there are always some kind of a limit on the amount of money a typical household can spend each month.  Jay Z’s or Bill Gates monthly spending limit may seem infinitely greater than my own meager limit, but even millionaires and billionaires have a limit and cannot spend a trillion dollars a month!

For a moment, my children’s rationale to give away their relatively new clothes almost made perfectly good sense.  I could help the poor, better ensure the jobs of the cashier’s at the local mall, and potentially provide a sense of job security for at least one of the workers at a credit card collection call center.

But, alas – I am not the federal government.

In 1917, with the passage of The Second Liberty Bond Act, the Congress of the United States decided to make the tasks placed on congressmen by the US Constitution a bit easier by allowing the Treasury department to borrow any money that was needed to pay for the programs that Congress had already passed. Prior to 1917, Congress actually had to vote on any new debt incurred by the US government.  The Second Liberty Act of 1917 created what we now commonly refer to as the debt ceiling.  The Treasury Department can borrow up to a certain limit each year to pay for the programs that Congress has voted to pay for each year.

The US federal government can also increase its income by giving itself a sort of raise in the amount of money at its disposal for spending by simply increasing taxes and tariffs.

But, I, like most Americans, cannot simply decide to give myself a raise to have more money to buy the additional clothes that my daughters want. I have tried to charge my clients more money for the legal services I have provided and they have either found a cheaper lawyer or simply refused to pay my bill.  I am even looking for an actual job to meet the ever expanding needs of my daughters’ philanthropic desires to give to the poor and boost the economy by having more money to spend at the mall.

I guess one could say that my household budget is currently going through a sequester.  I have been forced to cut my budget on certain items, which my daughters think are unconscionable.  I no longer hire a babysitter to pick the girls up from school. I no longer hire a housekeeper to come by the house once or twice a week. I even have taken to mowing my own yard. In essence, my household budget cuts have already curtailed the monthly incomes of some very nice people.

So, when I hear the gloom and doom news stories of dire federal furloughs, private sector layoffs, and reduced services to the poor because of the federal sequester, I almost panic.

I imagine my daughters organizing a brigade of mall workers, clothing manufacturer workers, textile workers, and Goodwill employees at my doorstep to demand that I go out and borrow more money and find a way to increase my income to better insure their jobs.  And, I can even picture my former babysitter and former housekeeper shouting that I could have cut out paying for my daughters’ extracurricular activities instead of ending their services.

I am really glad I am not the federal government.

On August 2, 2011, President Barak Obama signed the Budget Control Act of 2011, which provided for very specific budget cuts, if the well-paid members of the Joint Select Committee on Deficit Reduction (aka “the Super Committee”) could not come up with a better way to shave about $1 trillion off the federal budget over a ten (10) year period , by the last day of that year. The Budget Control Act of 2011 was passed in large part as ameans to once again increase the federal debt ceiling, or the amount that could be borrowed by the US to pay for agreed upon spending by Congress.

So, after five (5) months of debate, the Super Committee, composed of twelve (12) bi-partisan members of Congress, six (6) members of the House and six (6) member of the Senate, announced that they could not come up with a better plan to reduce federal spending, limit the federal debt ceiling, or to increase federal revenues, than the plan that had already been signed into law.

Now in March of 2013, the news media attempts to create a frenzy over the $85 billion in federal spending cuts that are to take place this year. Lobbying groups representing everything from child day care centers to federal park centers and from meat processing plants to airport facilities are descending on DC to demand that the federal government borrow more money and find a way to increase revenues in order to not end their services and to better insure the jobs of workers in particular industries.

When I make a budget for my household, it becomes the law of my household.  Unlike the federal government, I realize that necessary budget cuts are going to cause some cuts in services and may potentially affect some jobs. But, unless someone reading this blog decides to offer me a new job, I will live within my budget and enforce the cuts on spending, which I have already decided to cut.

Laws in the US will become meaningless if the American public allows Congress to pass laws for budget cuts that have no real meaning when passed.  While any law can be overturned or repeal, it makes no sense to pass any law with the hope that new laws will be passed later to fix the problems created by the passage of the first law.

While I applaud my daughters’ noble gesture to help the poor, I realize that they would never offer to use the money from their own allowances to buy clothes to give directly to the poor. I realize that they would rather buy tickets to see a movie than to pool their money together to hire the housekeeper back for one day during the month.  My daughters are like most people when it comes to managing a budgetary crisis; they want certain things done as long as the money for the things they want does not come out of their money.

Congress should follow the example set by millions of households across the US.  Most household, like my household, often experience tearful pleas to be provided with things for which there is simply not enough money.  All budgets have some consequences.  No one wants the poor or elderly to suffer.  But, no one wants an increase consumer prices or a layoff of workers for some to afford to pay higher taxes.  Simply put, regardless of the inevitable fall out in one sector or another, Congress and the President should follow the budget cuts that have already been signed into law.

About the Author: R. Nachael Howell Foster, a graduate of the George Washington University Law School and Duke University, is a licensed practicing corporate attorney.  When she is not advising small to medium size businesses on matters ranging from intellectual property, she writes and lectures on the value of law to all aspects of Americans lives.  Nachael has three daughters and three dogs, so Nachael’s World is always fun, straight-forward, and informative.  You can read more about R. Nachael Howell Foster at http://nachael.wordpress.com/