Partisanship and the Voting Rights Act

The Voting Rights Act of 1965 (VRA) was passed under the reasonable assumption that states once mired in racial ugliness would make painstakingly slow progress toward racial equality. Yet that is not the reason the VRA was reauthorized by Congress so many times since.

Rather, the VRA was amended over the decades to institutionalize a practice which both Democrats and Republicans believe helps them stay in office: racial gerrymandering to create “majority-minority” districts.

Democrats like packing Congressional districts heavily with minorities because it means even rock-ribbed conservative states like Mississippi, Alabama, and South Carolina elect at least one Democrat to Congress. And Republicans like this practice because concentrating minority voters in a single district makes every other district whiter, and therefore, more Republican.

In pursuing these strategies, both parties have been wildly shortsighted and badly miscalculated their interest.

Being true to the intent of the VRA and spreading minority voters rather than concentrating them would mean that Democrats would give up a lock they have on Congressional seats in states like Texas and Mississippi. Yet as political scientist Dave Wasserman observes, “The Voting Rights Act has become one of Democrats’ biggest roadblocks to taking back the House.”

For Republicans, the status quo of black and brown-packing districts is bad because we have a majority of the House which only represents a minority of America. We can never move from the politics of old to the politics of inclusion until politicians represent districts which are representative of their states, not carved up precisely for their lack of verisimilitude to the rest of the state.

If Republicans cared to compete for black and brown votes (the track record so far points to “no”), they might care that black voters are not well-served by the current arrangement. Most black Congressional districts have persistently high levels of poverty even though they’ve been represented by black members in Congress for decades, proof that political power does not translate into material improvements in the lives of everyday black Americans.

The table below shows the 42 black-represented districts in the 50 states plus the District of Columbia. Most of these districts have poverty rates 30-percent higher than the national average or more. But most troubling — why all Americans should be alarmed — is the lack of genuine democracy in these districts. 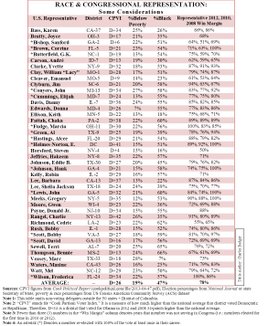 Fourteen of these 42 districts have representatives who won unopposed or with 100 percent of the vote at least once in their careers. More eye-popping are the “Super 100-percenters”: Rep. Alcee Hastings, Fla., has been re-elected with 100 percent of the vote a whopping four times in his career, Rep. John Lewis of Georgia five times, and New York Rep. Gregory Meeks also five times.

When Third World autocrats win by those margins, U.N. election monitors are dispatched with haste.

Simply put: In most black Congressional districts we don’t have elections. We have coronations.

Black Congressional districts also have a troubling dynastic feature, wherein whole black-majority cities are run by single family for generations, a phenomenon which reduces elections to beauty contests, not laboratories of democracy. The Kilpatricks of Detroit, Fords of Memphis, Meeks of Florida, Paynes of New Jersey, Clays of Missouri and Carsons of Indiana are but a few examples.

The question that should’ve been asked after Hurricane Katrina is, why did a city with a black mayor, a black police chief, majority black judges and police force, black state representatives, black state senators, and represented by a black man in Congress for more than 20 years have so many black people in poverty?

The Supreme Court’s reasoning in the recent Voting Right Act case was wrong on many levels. Yet those of the left should not be so quick to condemn the Supreme Court, since they are surely correct that Congress should reexamine the formula under which state are covered by Section 5’s pre-clearance requirement. However, the conservative chorus that argues that no pre-clearance is necessary is quite wrong, too. The VRA is not, as Charles Krauthammer thinks, an act “whose time has come and gone.” Nor does Jonah Goldberg get it right when he writes, “we don’t live in that world anymore.”

Majority-minority districts are not the solution to bolstering black political participation. However, the mythology that no state laws present a threat to minority voting rights is fiction that, to borrow from DuBois, “is borne out of the folly of fools.”

About the Author: Charles Badger is a Republican political strategist, speechwriter, and former aide to a Member of Congress, currently working in the financial services industry. He holds a B.A. in Philosophy from Berea College, and currently lives in Washington, D.C.