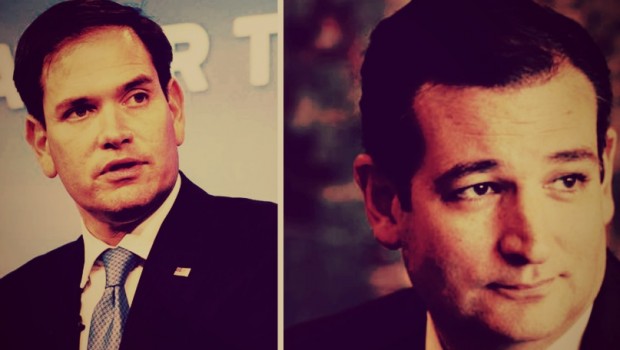 Winning Latinos to the GOP Requires More than a Latin Face

Latino voters presented a significant boost to President Obama’s 2012 electoral victory. Obama won 71% of the Latino vote, second only to Bill Clinton’s 72% in 1996. As Republicans go, George W. Bush scored highest among Latino voters winning 40% of their votes in 2004. Recreating Bush’s success among Latinos would make the GOP an unstoppable force in presidential races. The Party knows this and scrambles for outreach opportunities, including highlighting the ethnic identities of some of the highest profile national Republicans. As the 2016 presidential race breaks ground, two Latino Republicans face an interesting appeal to Latino voters that speaks to the intersection of identity politics and Republican immigration policy.

Texas senator, Ted Cruz (already a 2016 presidential candidate), and Florida senator, Marco Rubio (a potential contender), arguably make up the two most visible Republican Latinos in the country. Both, though, suffer among Latino voters because of how their immigration stances square with their ethnic identities. For starters, they’re Cuban–sons of Cuban immigrants. Cubans make up only 3 percent of American Latinos, while the overwhelming majority of American Latinos are Mexican.

“To think that Mexican-Americans, who make up two-thirds of U.S. Latinos, will embrace Rubio just because he has a Spanish surname simply points up the cluelessness that dug the GOP its Latino hole in the first place,” writes Tim Padgett in Time.

Their heritage puts them at odds with the Latino immigrants who represent the primary focus of the immigration debate. Cubans who sneak out of their country and arrive on the shores of the United States are instantly legalized. Mexicans who do the same are not. Fighting legalization efforts for illegal Mexicans appears to many as pulling up the rescue ladder after climbing out of danger. Left wing immigration activist groups like the Dream Action Coalition responded to Cruz’ candidacy incisively, hammering him on his immigration stance. Co-directors, Cesar Vargas and Erika Andiola even  penned a sickening and insulting statement about Cruz saying:

“While Ted Cruz has a Latino name and immigration in his past, that’s where the similarities between him and the Latino community end.”

The answer to this problem mirrors that to the problem Republicans have with other minority groups–Republicans must mind their tone and avoid patronizing those they wish to attract. On the topic of immigration, Mr. Rubio understands this.

“Rubio may have helped narrow the uneasy gap between Cubans and the rest of Latinos. That’s because he took the unprecedented step of comparing the designated beneficiaries of the DREAM Act – who are mostly of Mexican…descent – to ‘Cuban refugees’…Extending similar consideration to non-Cuban teenagers and young adults who were brought to the U.S. as children by their illegal immigrant parents is ‘a humanitarian mission,’ said Rubio… “We have a chance to allow them to get right what their parents got wrong.”

Mr. Cruz, on the other hand, must clarify what he believes should befall the illegal immigrants who live in the United States currently. So far, Cruz equivocates. He enjoys the perception that he registers on the far right of the Party on immigration–the section of the Party that excoriates Mr. Rubio’s softer approach to the hot-button issue–but in reality, his position differs little from Rubio’s. The difference between the two is tone. Tone will determine which candidates survive the nomination process, and which will drop out before the contest ends. More importantly, though, striking the right tone on immigration, one that respects the rule of law while recognizing the humanity of the people who fled their homes to come here, risking their lives and their children’s lives in order to work and live peaceably, ranks a top priority for a Party seeking to attract more people to its ranks. A Spanish surname isn’t enough.