In light of the recent police brutality cases occurring across the nation, Democratic Governor of New York Andrew Cuomo met with the mogul and nineteen-time Grammy Award-winning rapper Shawn “Jay-Z” Carter to discuss criminal justice policy. With the clear intention of being insulting, the writers of an article, which was posted at both the New York Post and Fox Nation, referred to Carter as a “former crack dealer.” The text of the article further posits that Carter “earned most of his expertise in crime as a crack dealer.” Those who are critical of people like Jay-Z contributing to criminal justice policy demonstrate their lack of dedication to serious criminal justice reform.

First, it is important to note that there is something deeply repulsive about dismissing all of Jay-Z’s glittering achievements and referring to him by a name that reflects the worst part of his history. Not everybody has sold crack, but everybody has aspects of their pasts upon which others can look down. It takes a peculiar level of wickedness, however, to see a man who has risen to the status of having a combined, legal net worth of $1 billion with his wife, the seventeen-time Grammy Award-winning vocalist and musician Beyoncé, and use his past to devalue his undeniable contribution to society as an upstanding citizen. It is interesting that those who pay continued lip service to the idea of the disadvantaged lifting themselves up by their own bootstraps and turning their lives around are the same people who are the first lobbing cruel rhetorical grenades at those who have worked hard, defied the odds, and reached the zenith of their professions. 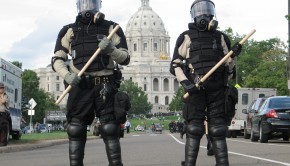 Centralized Policing Is the Wrong Solution →