Many wine buffs debate the seminal moment when American wine announced its arrival. Most argue that it is not any one moment, but rather a confluence of events. When looking back through U.S. wine history, there are events that stick out as driving forces.

When you ask someone who is familiar with wine history, “When did American wine become relevant?” the most common response would typically be the Judgment of Paris. In 1976, Steven Spurrier, a British ex-pat living in Paris decided to put on a wine tasting to assist in promoting his struggling wine shop. With the American Bi-Centennial coming up, he thought it the perfect opportunity to showcase the wines of California versus their obviously superior French counterparts. Who could blame him? The event sounds like something fun; however blind tasting of wines are nothing of note.

What no one, including Spurrier, could have imagined was that two American wineries (Stag’s Leap and Chateau Montelena) bested the Frenchies in both the white and red categories. In doing so besting some of the legendary houses of Bordeaux and Burgundy, France’s bastions of wine excellence.

Now those who make the argument for the Judgment of Paris being the sole seminal moment have a strong case. This is not up for dispute; however the one reality that is often overlooked is that this event, although a romantic story that lent itself to a cute movie (Bottle Shock), is not quite as resonating as many think. 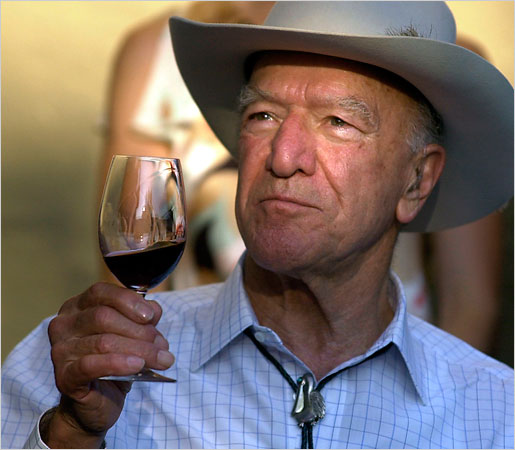 An equally significant event took place 63 years earlier with the birth of Robert Mondavi. The provocative journey of son of Italian immigrants who went on to become Napa’s most iconic figure is an alluring tale. However it is the two aspects of the man that made him iconic that are of note.

First, Mondavi was California’s ambassador of wine and did more than anyone to promote the high quality of the wines coming from the fledgling NapaValley. From wine shop owners in Chicago to restaurantuers in Manhattan, from presidents to foreign dignitaries, everyone heard about the exciting things happening not just at Charles Krug Winery, and later Robert Mondavi Winery, but across Californian wineries in general.

The second aspect of Mondavi that made him unique was his early vision and embrace of Globalization and business. We could speak of his marketing exploits or his numerous joint ventures with Old and New World wine houses; however there is one joint venture that is most important. In 1979 Robert Mondavi teamed up with infamous Baron Philippe de Rothschild of Chateau Mouton-Rothchild (who was soon survived by his daughter Baroness Philippine), to create Opus One.

Opus One is the most significant wine in America. Everyone from Wall Street elite to construction workers recognize the respect this wine commands. This is not because it’s the best, but rather that Opus One represents, for the first time, the moment that the Old World deemed American worthy of collaboration. This was so much the case that Rothschild thought the wine worthy of having his iconic profile on the same wine label with Napa royalty. Up until that point, California (and Napa more specifically) had been viewed as largely a backward, hick village that made some nice wines. That all changed in the early autumn of ’79 when legendary winemakers Lucien Sionneau of Mouton Rothschild and Tim Mondavi of Robert Mondavi Winery teamed up to create the first vintage of Opus One.

This union represents something very significant, as not only did Europe’s perception of American change, but America’s view of American wine changed. Dating back to Thomas Jefferson, Americans have always looked across the Atlantic for their wines, as most had largely shunned the wines from the “sticks” as inferior.

Both of these events took place within a couple years of each other and the momentum they created led to the US Wine Industry as we largely know it today. The areguement is not that one event was more significant than the other, but rather the confluence of these two events running simultaneously that made this period so significant. In many ways, the Judgment of Paris was only possible due to the unabashed promotion and increased quality ushered in by Mondavi (and his colleagues). On the flip-side, the potential of a venture such as Opus One was justified by the success of Napa’s wines at the Judgment of Paris tasting. Thus, these events and figures are equally important, not only to American wine, but to each other.

ABOUT THE AUTHOR:  Erol Senel started out as a student of history but has been plying his trade in the world of finance and personal investing. Through this real world experience, he has found his true professional passion in economics and financial history. His mission is to provide readers with easy to understand, topical and informative articles with the hope of allowing many to make more informed decisions while partaking in civics and life.  @senelslant