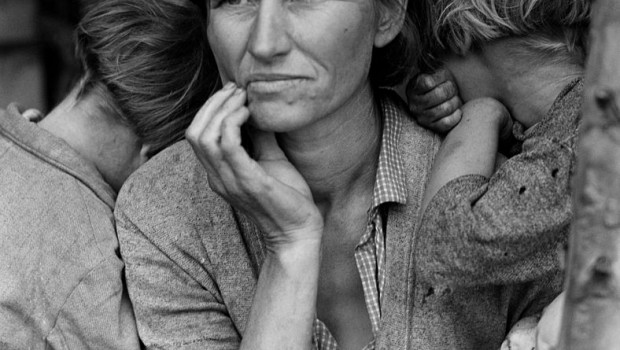 Hope and danger in income inequality 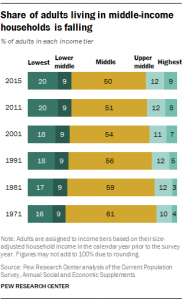 Across a large swath of the left and the right this notion has become so accepted that it is no longer questioned: a tiny percentage of very rich Americans are reaping all the rewards of global capitalism while the rest of the country sees their lifestyles and hopes decline. As is so often the case with a convenient political narrative, the data doesn’t add up.

Our inequality narrative is regarded as self-evident. That’s unfortunate, because this tale is just true enough to be convincing and just false enough to pose a threat to our future. What is happening to the great economic middle is far more complex than our simplistic 1% myth. Monsters hide in those details.

Widely reported research released last week by the Pew Center reinforced these misconceptions. It shouldn’t have. Beneath the study’s headline touting a declining “middle class” lies data that points to a far more complex and promising reality. Consistent with a previous post here on the end of the Middle Class Era, and analysis in the book The Politics of Crazy, we seem to be missing a hopeful economic transformation. Only the shadow cast by that trend is evident in income data.

Key to our income concentration myth is a collection of gaps and complexities in our available data that make it difficult to build an accurate picture of income trends. We get our best information about household income from two sources, aggregate tax returns from the IRS and surveys made available by the Census Bureau. Each source is reliable for certain purposes while burdened with their own unique glitches. Our misconceptions about income trends rise mostly from mismatches between those two sources.

Data from tax returns creates one of our most persistent and frustrating distortions. Though aggregate tax records give us a more precise account of income than survey data can provide, not everyone files a tax return and there are many complex forms of earnings that do not compare easily to ordinary income as reported on a W-2.

Worse, tax records only allow us to measure incomes anonymously and in annualized slices. These annual aggregates do not allow us to follow a particular household over time. Our temptation to paste over the gap in our knowledge with assumptions of income persistence or income predictability has been too enticing to resist. It turns out that the persistence we assume in the data does not exist in reality.

Survey data helps augment our understanding by allowing researchers to paint a richer picture beyond IRS-reporting income data. It also introduces a time dimension missing from tax returns. This is helpful, but data gathered in surveys can never match the precision of income tax statistics. People are rarely aware of their income in precise, reliable terms, making it impossible to overlay the Census surveys with IRS aggregates. As a result, the value of Census data is mostly limited to the picture it paints of respondents’ perceptions of their own income trends. A critical look at these two data sources with an eye on their limitations exposes a very different picture of income inequality from the standard narrative.

Between these two sources of data, here’s what we know reliably.

The share of national, annual income going to the middle quintile of earners is in long-term, steady decline. That decline did not start with the Reagan tax cuts, or the Bush tax cuts, or the dawn of the Internet economy. Middle earners have been taking home a declining share of national income since 1957. That’s right, as soon as America began to recover from our Depression/World War 2 hangover the middle started to lose ground.

The share of national income going to the highest earners has been rising. That rise began in 1959, with higher income cohorts gaining ground inexorably at rates that have slowly increased over time. On an annual basis, more and more household incomes are falling at the farther ends of the spectrum. Fewer households are earning salaries in the middle percentiles.

Survey data from the Census, which informed the Pew study, augments our understanding of this phenomenon with a valuable insight. The number of American households earning middle incomes is no longer a majority. More importantly, the overwhelming bulk of Americans moving out of the middle income tier are moving up.

While it is true that our mythical “middle class” is gone, they have not been destroyed. On the contrary, they have advanced. They are steadily graduating up the income ladder to create a new cultural niche. Since 1971, the percentage of households in the top income tier has more than doubled while the number in the bottom has increased by only a quarter.

If this is true, then why does the doom-laden narrative on income inequality to continue to resonate all across the political spectrum? Though relatively few households are falling into poverty their racial composition and regional concentration makes them political dynamite. Blacks, Hispanics and women are all big winners in this economic shift along with almost everyone earning a college degree. Almost half of black families led by a married, middle-aged, college graduate are in the top income tier. Those who have lost ground in relative terms are overwhelmingly white, poorly educated, and rural – a matter for a much longer, more difficult post.

Our perception of this situation might be more hopeful if we could see past another distortion in our IRS income statistics that is only slightly adjusted in the survey data. In income terms, both of these taxpayers will be identified as poor: a single mother earning minimum wage at a fast food restaurant and a second-year law student at Duke. To make aggregate evaluations even more difficult, that law student has probably been sitting in the lowest income quintiles for several years and will continue to show up there for several more. She might take a year off after graduation to travel, and then spend another year living with her parents while doing free or poorly paid work for a global NGO. She might spend ten years contributing to our poverty statistics before starting her real career at age 30 earning $160K a year.

Similar distortions occur later in the career arc. A professional who left a salaried job to launch their own very successful business might register “income” in the lowest quintiles for several years. Once they start getting paid they might immediately soar into six figures, but our annual-only assessment of incomes will not capture this arc, nor account for the ways that wealth might augment income for those temporary low-earners.

At the late stages of the typical career arc this distortion becomes unusually strong. Incomes as measured in tax-accounting terms do not capture many of the methods by which retirees support themselves, especially capital gains and dividends. Those statistics also fail to account for subtle wealth effects, like the impact of a modest home with no mortgage or other reduced expense burdens rising from a lifetime of social and economic stability.

Studies are starting to demonstrate the ways that our changing career arc distorts our statistical understanding of income inequality. In income terms, there is no “1%” as a coherent social group any more than we still have a culturally relevant “middle class.” Almost no one reaches the 1% and stays there and a surprisingly large number of Americans will reach those income levels at some point in their careers.

Several recent studies have sought to track income fluidity. Their findings suggest that almost 12% of Americans will register a 1% income at least once in their career and a whopping three quarters will spend at least one year in the top 20%. More importantly, of those who reach the 1% income level, less than .5% will remain there for a consecutive decade.

Here’s an alternate narrative. It is more consistent with the data and better explains the way our economy is evolving. Thanks to expanded access to education and broader opportunities to use knowledge to earn a living, people start their careers later than ever before. Again thanks to the knowledge economy and improved access to education, those careers are fantastically more lucrative than anything people had access to thirty, forty or fifty years ago. As a result of higher pay and better working conditions, those careers are shorter than they ever were, meaning a much larger chunk of the population spends a large portion of their old age living primarily on sources other than taxable income.

These folks may not represent a majority of American workers, at least not yet, but they are a dominant and growing plurality. More Americans than ever before are graduating from high school. More Americans than ever before are completing college. Our new, more dynamic career arc is coming to define our economy in ways that challenge old understandings of success or failure. Those same forces are changing the meaning of a job.

When a plurality of the population has a career arc matching this pattern – late-starting careers, good incomes in the middle punctuated by occasionally “big-hit” years with ordinary W-2 incomes tailing off early, you get a pattern of average incomes looking exactly like what we see in our income statistics. Lots of people steadily concentrating at the lower incomes, increasingly few in the middle, and an increasingly large cohort showing up each year at the higher ends.

Growing income inequality on an annual basis is absolutely real, but it probably doesn’t mean quite what the Bernie Sanders crowd thinks. We do not have a monolithic bloc of 1%’ers dominating our economy. One of the reasons there is so little general support for radically redistributive policies is that those policies would negatively impact a far larger bloc of voters than their proponents imagine. Most people with a college degree are participating at some stage of their careers in the top tiers of the job market. Economic outcomes are far more dynamic, and improving at a far faster rate than the popular narrative would suggest.

Contrary to popular belief, the world is getting better. However, a significant chunk of the population is missing out on these benefits entirely. When we think of poverty and decline we often draw a mental picture of struggling minorities in our inner cities. Our focus on this outdated picture of poverty helps explain our inability to understand Donald Trump and the rise of the far right in America.

If we are going to develop political policies in line with measurable economic realities then this paradigm should change. Our income statistics and the Trump phenomenon together have a vital story to tell – economic decline is now primarily a white rural problem. We have misidentified the biggest winners and losers emerging from this stage of capitalism. Our politics and our public narrative need to adapt to this volatile emerging dynamic.