The rapper Lupe Fiasco, set the normally Pro-Obama hip hop world on fire with his comments some years ago labeling President Obama a “Terrorist.”

“In my fight against terrorism, to me, the biggest terrorist is Obama in the United States of America. For me, I’m trying to fight the terrorism that’s actually causing the other forms of terrorism. The root cause of the terrorism is the stuff that you as a government allow to happen and the foreign policies that we have in place in different countries that inspire people to become terrorists. And it’s easy for us because it’s really just some oil, which we can really get on our own.” -Lupe Fiasco

For libertarians, statements like this are nothing new. It’s something libertarians have been saying for the longest. Although Lupe chose some very strong words to describe President Obama and his foreign policy, it served a purpose, and that was to cause attention, not only to himself (rappers in essence have to be self promoters), but to draw attention to the elephant (or donkey) in the room for most hip hop heads; that Barack Obama, who was constantly and consistently promoted, endorsed, and immortalized by rappers, music executives, and hip-hop journalists, is carrying on the same failed and disastrous policies that George Bush instituted.

Barack Obama ran on a platform of “Hope and Change”, saying he will get the troops back home and have a common sense foreign policy that will rely on diplomacy and pragmatism, instead of thousands of troops, tons of bombs, barrels of blood and Trillions (with a T) of dollars. He lied. Since taking office, we still have over 100k troops in Iraq, although for “non-combat” reasons. Obama instituted a surge of troops in Afghanistan, and we have been constantly bombing countries like Pakistan, Yemen, and Somalia (countries we have to declared war on) with drones operated by CIA operatives and contractors. This is not the hope and change people were looking for.

Many in hip-hop give Obama a pass, they say “He is doing the best he can” or “At least he got Osama!”, I was even told by a friend of mine that “Obama is not in control.” All of this is ludicrous. It was delightful and refreshing to hear Lupe’s comments. Lupe Fiasco is one of the most intelligent and thoughtful rappers of today. For him to say those things and stand by them only adds to his credibility as an artist and an independent thinker.

Everyone else is still either caught in the glitz and glamour of finally having a black president, or fear that speaking their true feelings will cause them to receive some of the criticism that Lupe is currently receiving. My question is, if you switched the word Obama with Bush, would you feel differently about his comments? Plenty of entertainers have lambasted Bush for his foreign and domestic policies (and rightly so), and were usually given a thumbs up by their peers in the music industry. Why is this so different?

Thousands of innocent people (collateral damage) have been killed at the hands of United States and NATO coalition forces, all in the name of terrorism. What is a terrorist? One who systematically uses of violence and intimidation to achieve some goal. The United States would fit under that description, if you ask the family members and friends of those thousands of innocent people killed by drone strikes and bombing campaigns. This is a tragedy and only fuels the hatred toward America.

America has a right to defend itself, but going into sovereign nations without a declaration or war, occupying them, installing governments of our choice, bombing and rebuilding, and raping their natural resources give cause to terrorists plight. As Ron Paul’s says “We need to get out!” Lupe has ever right to express his opinion on the matter, no matter how you try to morally justify what we are doing over there, it is wrong.

As a life long fan of hip-hop music, one of the things that I loved about it is the anti-establishment, challenge authority message in the music. N.W.A’s “Fuck the Police, Public Enemy’s “Fight the Power, 2 Live Crew’s “Banned In the USA” all carry a theme Libertarians endorse. Which is, always challenge authority and people or institutions that try to control your actions. I always found it funny that virtually all in hip hop align themselves with Democrat politicians, when it was the Democrats like Cynthia Tucker and Al Sharpton who waged a war on hip hop claiming rappers like Tupac and Ice Cube were the reasons black neighborhoods have become beds for gang violence and drug crimes. Not the War on Drugs or the United States policies which turn low income people into criminals just by living in a certain neighborhood.

Libertarians have been against the War on Drugs since it’s beginning, believing that you own your own body, and by prohibiting someone from something, only creates more crime and an environment where gangs, organized crime, and violence is the norm. Another libertarian issue is police brutality. Libertarians, not Democrats, and certainly not Republicans, have long been opponents of police brutality, SWAT tactics, misuse of force, and warrantless search and seizures by ALL policing agencies, city, state and federal. This has been a hot button issue in the hip hop nation for decades. When groups like NWA spoke out against police brutality, politicians and public officials lined up to criticize them and tried to limit their rights to free speech, saying they are igniting violence against policeman. Well what about the violence against common citizens? Libertarians have always been on the right side of this issue, while Democrats and Republicans stood with the police.

The government’s blatant attack on free speech hits at the core of what libertarians have been warning about for decades. When you give government the power to regulate portions of your life for “security reasons”, even if they seem inconsequential at the time; there will come a point where the heavy hand of government will eventually knock at your door if they do no agree with your actions or speech. In a time when police departments have set up actual units whose mission is to review rap lyrics and use them to build cases. This is unconstitutional and a waste of taxpayer dollars.

What is Libertarianism? Libertarianism is a political philosophy that upholds individual liberty, especially freedom of expression and action. Libertarians believe in the natural rights of having the freedom to speak and do as you please as long as you’re not interfering with someone else’s freedom to life, freedom, and property. It’s really that simple. I often wonder why there aren’t more libertarian rappers. Mobb Deep’s Prodigy has said he grew interested in Ron Paul after he saw him debate. A lot of rappers and hip hop heads would be surprised how much they have in common with the old white guy named Ron Paul. He’s anti-war, anti-police-state, anti-drugwar, and anti-corporatism. Although he is Republican by name, his stance and his voting record is very anti-establishment and it would behoove fans of hip hop to look into him and the libertarian philosophy.

ABOUT THE AUTHOR: Ryan Jones was born and raised in New Orleans, LA and undereducated in public schools. After years of unlearning government propaganda, he has become a libertarian and fighter for liberty.  He is currently working and living in New Orleans where he hopes to remain.  By day, Ryan is a IT Specialist with a Fortune 500 company, by night he is libertarian activist and staunch supporter of individual liberty, economic freedom, and world peace. Ryan received his Associates of Science degree from a local technical college, and is contemplating selling his kidney to pay off student loans. 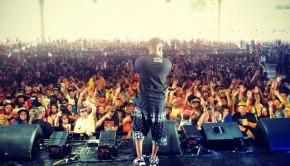 A Black Conservative Explains His Dilemma →