Duck Dynasty and the Boundaries of Tolerance

There is a meaningful question hiding among the Palinesque blather over Phil Robertson’s suspension from Duck Dynasty. We seem to have reached a broad general agreement that differing viewpoints, choices and values should be tolerated in an open society. So how much protection and tolerance should we grant to expressions of bigotry?

We have fought to ensure that voices outside the conventional mainstream have room to be heard in the public square. Strip clubs are protected under the First Amendment. Schools and other public venues are prevented from imposing a majority value set on everyone else. Over the past generation, we have established a new consensus in favor of the open expression of ideas, regardless of how those ideas may challenge public assumptions or offend a few.

It may be time to wrestle more honestly with the question of how to cope with expressions of bigotry. We already protect bigoted political expression to a far greater extent than any other democracy. The Skokie case in 1977, in which a Nazi group was allowed to march through a predominantly Jewish Chicago neighborhood established our commitment to tolerating public expression of even the most offensive character.

What’s happening with Phil Robertson though is quite different from Skokie because this is not a First Amendment question. No one is censoring Robertson’s right to speak. America protects his right to spout off his ignorant opinions to anyone he wants.

No one is going intervene legally to stop the Robertson’s from taking their faux-reality antics over to Glenn Beck’s traveling freakshow. The question is not one of free speech, but the marketplace of ideas.  The question is: What are we going to let people express without relegating them to the cultural margins?

Tolerance is a tough value to protect. The reason we shudder when someone is allowed to express racist or homophobic opinions in a generally respected forum is that bigotry thrives on tolerance. Unchallenged expressions of bigotry spread the disease like a flu victim on an airplane. Much of the progress achieved by minority groups in America over the past generation grew out of a commitment to challenge bigotry wherever it appears.

That said, who gets to decide what is and is not tolerable expression? Robertson’s comments are particularly interesting in light of this question. Is there anyone with family ties to the South who was honestly surprised by what he said about homosexuals and race relations?

Robertson’s Holocaust denial-style reinterpretation of race relations was racist and ignorant. It is also the consensus opinion of most white men over 50 in the South. His comments on “Shintos,” gays, blacks and others were incredibly stupid, but they were far more nuanced and far less inflammatory than the comments and accusations that surrounded Paula Deen.

And let’s remember, Duck Dynasty isn’t Meet the Press. If you can’t appear on a goofy reality show in a third-rate network after making a series of ‘drunk uncle’ comments in an interview, then few Southern white men are fit for TV. This is not a straightforward issue. Tolerance means creating an open marketplace of ideas. It means having a choice between Glee and Duck Dynasty, between Starbucks and Chik fil-A.

The world will be a better place when the bigoted opinions and values expressed by Robertson sink into the swamps at the margins of our culture. At some point, as the racist and homophobic ramblings of guys like Robertson are shifted farther and farther to the cultural margins, we may decide that they deserve some kind of protection. We are not quite there yet. Today, Robertson is a frightening reminder of just how much arrogant bigotry still pumps through the veins of our society. That bigotry still impacts people’s lives in ways that darken their horizons and limit their potential.

Does bigotry deserve tolerance? In a sense, it does. To a certain extent, “tolerance” means letting Phil Robertson speak and letting him be judged by his words. In an open culture, Robertson deserves the same freedom to express his dumb opinions that we grant to the noblest Kardashian. And we all have the right to change the channel, throw away our fake beards, and work toward a time when such expressions become too irrelevant to invoke outrage.

Chris Ladd is a Texan who is now living in the Chicago area.  He is the founder of Building a Better GOP and has served for several years as a Republican Precinct Committeeman in DuPage County, IL, and was active in state and local Republican campaigns in Texas for many years.  He blogs over at (Email: chrladd AT gmail DOT com) 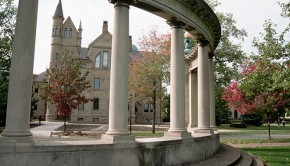