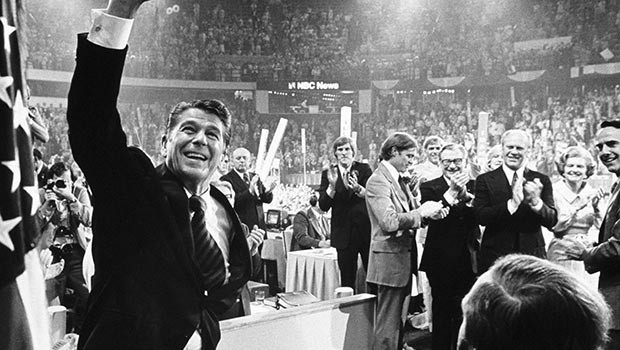 Dorian Davis: For the GOP to Move Forward, We’ve Got to Ditch Ronald Reagan

Dorian Davis, a libertarian writer and  journalism professor has a new piece up at WNYC’s It’s A Free Country blog arguing that to move on, the GOP has to ditch Ronald Reagan.

That was Mitt Romney’s problem – well, really the whole Republican Party’s problem – last Tuesday: here we were in the middle of the biggest economic downturn since the Great Depression, running against a beleaguered incumbent, and we still managed to lose because Democrats ran Barack Obama and we ran the ghost of Reagan.

Then Reagan-mania spread to the platform – the pro-Life language that the GOP adopted was identical to 1984’s – and to the convention in Tampa, where Newt Gingrich promised a return to “the principles that are at the core of President Reagan’s legacy.”

In the end, Reagan’s spirit even possessed Mitt Romney: In September, when his campaign had been faltering, Peggy Noonan happened to mention in her Wall Street Journal column that Reagan used to extend his hand to the crowd during his ’84 stump speeches and ask people to “come walk” with him. Lo and behold, two months later in a speech in New Hampshire, Romney was doing the same thing.