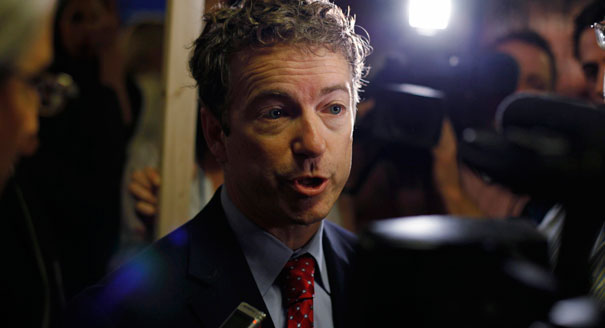 Rand Paul’s appearance last week at Howard University was half of a very good idea. Unfortunately, it was only the second half. He skipped the groundwork that might have paved the way for a more successful effort. If Rand Paul is serious about delivering a Republican message that can appeal to minority audiences he needs to go back to Howard.

A crippling misconception hobbles Republican efforts to reach non-white constituencies. Too many Republicans believe that minorities do not understand the history and platform of the Republican Party. That condescending logic leads to “outreach” efforts that look like Senator Paul’s speech at Howard, with predictable results.

Senator Paul’s work at Howard should have started with a small-group listening session, or perhaps two or three. It is clear from his remarks that he expected to deliver surprising revelations to an audience blinded by leftist ideology. His stunned disbelief at their sophisticated understanding of the party’s history and message was embarrassing to watch.

There are myths that are enthusiastically accepted by a white, Southern audience that African-Americans simply will not buy. The keystone of Paul’s speech – the notion that the Republican Party’s racial posture has not changed over the past century or so – is not going to sell to a black audience that knows better from hard personal experience.

Paul couldn’t resist presenting some deeply cherished delusions forged deep inside the far-right propaganda bubble. He made reference to his bizarre gold bug theories and his loathing of the Federal Reserve. He tied black poverty to the New Deal.

He blamed deficits for our terrible inflation problem – a problem no one seems to be able to find outside of far-right blogs. A Tea Party rally might buy the bizarre claim that government debt is fueling runaway inflation, but a roomful of graduate students tend to look at actual data and dismiss such nonsense.

Worst of all, Rand insisted that Jim Crow was a product of “big and oppressive government” attributable to the modern Democratic Party. Making a claim so demonstrably false to a roomful of people whose family histories bear witness to the error was negligent enough to be considered an insult.

There were some opportunities missed in this effort. Senator Paul’s efforts so far are better than nothing, and nothing has been the standard Republican campaign tactic in minority communities for the past forty years.

It is apparent from Senator Paul’s actions and demeanor that he genuinely wants to bridge this divide. It is apparent from his frustration that he is missing some helpful information. It is unclear whether, when presented with insights that challenge his ideology, he could make the necessary adjustments. There is only one way to find out.

Senator Paul should go back to Howard, perhaps more than once, and listen. Instead of fielding questions, he should be asking them. There is probably a political science professor who could assemble a relatively open-minded panel that would share the sources of their feelings about the Republican Party. Their insights could be very enlightening. He should perhaps send aides to spend more time gathering information and engage with the school on a continuing basis.

In his appearance at Howard, Sen. Paul faced an up-and-coming group of young professionals who really ought to be budding Republicans. It will take more than a speech to make that happen. We need to understand the ways that our message, tone, and policies alienate non-white voters and the young. Sen. Paul’s halting effort might go down as a failed outreach or it might become an opening to a new future for the Republican Party. It depends on what he does next.

Howard University is an institution of higher learning, a place where great minds find insights that change the world. Senator Paul, please return to Howard as a student rather than a professor. Complete the assignment you skipped. Find out why your audience was so skeptical and use that information to help build a Republican platform that can appeal to a changing America.

ABOUT THE AUTHOR: Chris Ladd is a Texan who is now living in the Chicago area.  He is the founder ofBuilding a Better GOP and has served for several years as a Republican Precinct Committeeman in DuPage County, IL, and was active in state and local Republican campaigns in Texas for many years. (Email: chrladd AT gmail DOT com)

One Response to Dear Rand Paul, Please Return to Howard