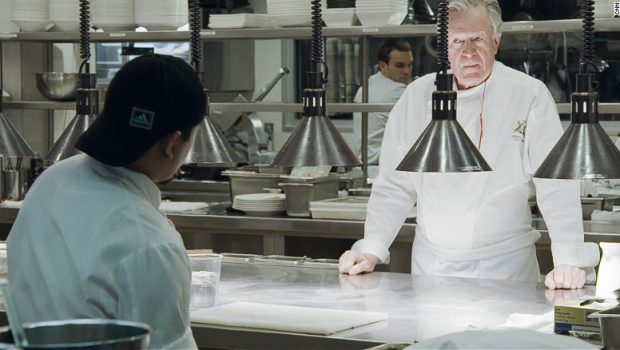 THE LAST MAGNIFICENT will debut on CNN at 9:00pm on November 12, 2017 on Sunday Eastern and Pacific Time.

Born in 1942 in Stamford, Connecticut, Jeremiah Tower graduated from Harvard School of design where he received a degree in architecture (M. Arch). His father worked at a film company, and his mother was a socialite-homemaker who on occasion drank too much.

Exposed to and influenced by the world of Culinary Arts at a very young age, The Last Magnificent documentary takes a candid look at the various forces shaping Jeremiah Tower throughout his life. Not only do we see recreated glimpses of the young Jeremiah being groomed for a life as a top-notch culinary artist, but we also see those factors which shaped and molded his character. Being denied the doting love of his parents, Jeremiah Tower learned how to be alone but never lonely. He endured the hardships of Australia and British boarding schools to find acceptance and a greater quality of life at Harvard as a young man.

Upon completion of his college education and finding himself penniless due to the death of his grandfather, Jeremiah Tower made his way in life as a chef at The Chez Panisse in Berkeley, California which was owned and operated by a very pretty Alice Waters. Both being gay yet also having an affair with Waters, Tower put the Chez Panisse and California on the map of Culinary Arts. Leaving the Chez Panisse over Water’s professional betrayal of Tower, Tower opened his own restaurant in San Francisco, called Starz, which he operated until the 1989 earthquake forced him to close all of his restaurants. Although forced into semi-retirement, Jeremiah Tower emerged once more in 2014 as the head chef at Tavern On The Green in New York City.

THE LAST MAGNIFICENT debuted at The TriBeCa Film Festival in 2016 and was released in the USA on April 21st, 2017. The Director of this superb documentary is Lydia Tenaglianca with excellent visual effects by Daniel de Graef and Angelique Georges. The producers of the film are Matthew Alvarez, Anthony Bourdain, Gillian Brown, Amy Entelis, Rachel Jerahiam, and Courtney Sexton. Giuliani Carmassi and Bryan Scary are responsible for the musical score while Morgan Fallon did the cinematography. Also featured in this film are Jeremiah Tower, Anthony Bourdain, Martha Stewart and Alice Waters.

THE LAST MAGNIFICENT will debut on CNN at 9:00pm on November 12, 2017 on Sunday Eastern and Pacific Time. The documentary will encore on Saturday, November 18th at 9:00pm Eastern Time and 11:30 pm Pacific Time. The film, which is unfairly rated R, is one hundred minutes long. After viewing this outstanding documentary, I feel that the secret of Jeremiah Tower’s repeated success is that he keeps moving forward in step with the changing times and does not look back nor dwell on the past.

On a scale of from one through ten I rate JEREMIAH TOWER: THE LAST MAGNIFICENT a ten+.

A MATTER OF CONSCIENCE: WHOSE? a film review of TROPHY →