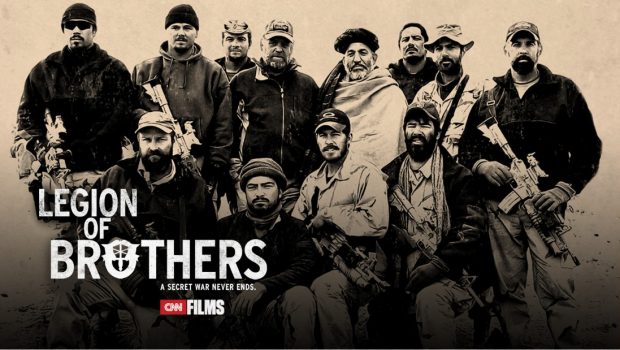 THE PRESERVATION OF AMERICAN VALUES: a film review of LEGION OF BROTHERS

Imagine life in America if North Korea invaded the United States through California taking over the entire United States. Gone would be the American freedom and values that we cherish yet often take for granted. In its place would be a Totalitarian Government and culture insisting that United States’ citizens do only what North Korea dictates.

This, then, was the situation in Afghanistan in September of 2001 when a division of the United States Army, called The Green Berets, were ordered to topple The Taliban/ Al Queda Government which had invaded and taken over the nation. The process through which The Green Berets liberated Afghanistan following the 9/11 terrorist attacks by Al Queda on the twin towers in New York, New York is the topic of a new CNN Documentary called LEGION OF BROTHERS..

LEGION OF BROTHERS is a low-key, compelling although somewhat confusing account of the liberation of Afghanistan by the United States in an effort to preserve American values and culture within The United States. Through outstanding cinematography, the action moves from gatherings in the backyards and homes of participating Green Beret Members in the states to “the theater of war” in rocky, arid and hot Afghanistan. The top secret mission to destroy The Taliban and Al Qaeda after 9/11 is told from the perspective of the Green Berets and their family members.

With their objective being the dismantling of The Taliban/ Al Qaeda Government in Afghanistan, individual Green Berets discuss how this was achieved throughout a four month period of time with the use of only one hundred American Troops and not without the loss of life and human suffering. Speaking in subdued tones as well as working hard at keeping their emotions under control, these brave men, who (out of necessity) had to keep their Mission a secret from their wives, are still jaded and guarded when discussing   the success of their Mission. Their reticence to discuss in-depth the liberation of Afghanistan does lead to a confusing but not confused account of the infiltration.

LEGION OF BROTHERS is written and directed by award winning film maker Greg Barker. The Documentary is also produced by Greg Barker along with Tresha Mabile, Peter Bergen, Amy Entelis, Vinnie Malhotra, Dianne Becker and Tyler Gurd. Edited by Robin Schwartz, the film’s superb cinematography is by Frank-Peter Lehman. The documentary’s music is by Phillip Sheppard with Courtney Sexton serving as the supervising producer.

In the future, when our children study history in school, along with discussions of battles fought in The Revolutionary War, Civil War, World War I, World War II and Vietnam LEGION OF BROTHERS should be included to discuss battles fought in Afghanistan to preserve the American way of life.

On a scale of from one thru ten,therefore, I rate LEGION OF BROTHERS 8.5.

About the Author: Cleo Brown is the film reviewer for HipHopRepublican.com. She lives in Manhattan and has a master’s degree in contemporary African-American History from The University of California at Davis and has done work on a Ph.D. in education at The University of San Francisco. She has published several poetry books and is featured in Who’s Who in Poetry.