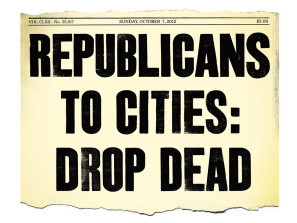 There are heavily populated precincts in places like Boston, Camden, Baltimore and other Northern cities where fewer than ten people vote in Republican primaries. A decades-long influx of Southern Democrats alienated by their party’s support for desegregation has utterly transformed the Republican Party nationally. As a result of this shift in values, Republicans have virtually disappeared from the electoral map in coastal states of the Northeast and West where they once wielded enormous influence.

Where the GOP has died, citizens have lost the political leverage that comes from partisan competition. Governments in Democratic controlled northern cities are increasingly dysfunctional, too weak to hold public servants accountable while hemorrhaging cash.

Reliant on an ever older, whiter, more Southern base, Republicans are losing the language necessary to speak to and hear minority and urban voters. Cut off from dissent, the party has descended into a bizarre spiral of extremism and delusion. The Republican Party is a one-legged stool.

Ironically, this extreme regional polarization has opened an opportunity. Business-friendly urban voters pushed to the margins of both parties have an opportunity to create a new identity for themselves.

By building a splinter party inside the hollowed out remains of the GOP in northern cities, these voters could do more than break their cities’ single-party politics. They could launch a movement toward multi-party democracy in the US.

How could they do this? By running the Dixiecrat playbook in reverse, but with one twist. Instead of trying to ‘take over’ the Republican Party at higher levels, Urban Republicans could create a local brand distinct from the Republican Party and in explicit opposition to many of its positions. In Northern and West Coast cities, center-right voters could launch a challenge to the GOP’s extremist wing from inside the party’s largely empty infrastructure. By taking over what today are hollow local Republican organizations in big cities, we can build a base from which to reform the party.

Urban Republicans (or whatever name makes sense) would work to recruit and elect precinct chairmen inside the Republican Party locally and influence city and county Republican politics. From their urban base they would send delegates (bearing their brand) to state and national Republican conventions. With enough success they would place candidates in city councils, state legislatures, and in Congress. But, those representatives would owe primary loyalty to their sub-party. They would retain a degree of distinctiveness from the GOP at large.

Why must this effort be pointedly hostile to national Republican rhetoric? No one is going to simply persuade the entities who currently lead the Republican Party to adopt a more open attitude toward urban and minority voters. With everything to gain and a fine plan on which to execute, Republicans after the 2012 Election specifically and forcefully rejected minority outreach.

Only by taking an openly hostile position to the Party of Donald Trump and the most extreme wing of the GOP could Urban Republicans establish any credibility with urban voters. And only by setting themselves apart from the hopelessly corrupt, sclerotic Democratic institutions that dominate urban politics in the North could this emerging generation bring modern, effective government to big cities.

How would we run this playbook?

Identify a small team, perhaps no more than 20 or 30 people, who will collaborate on a platform. That platform need not be particularly liberal or conservative, per se. Urban politics, when it works, is pragmatic. The platform must do three things: confront the Republican Party’s disastrous embrace of denialism, confront the Democratic Party’s willingness to place patronage demands above public interest, and be a product of input from minority communities.

Whatever Urban Republicans decide to do about taxes, or abortion, or school funding or any other topic, to win votes in cities those policies must be grounded in reality. A platform that confronts nothing but these four inescapable realities might be enough to set Urban Republicans apart from the national party and earn significant urban support.

It would also be wise to take at least one ‘big bet’ position popular with voters in cities that is distinctly separate from both party’s platforms. Vocal embrace of marijuana de-criminalization stands out as a promising possibility. It’s popular in cities. It’s enough of a head-turner to buy significant media attention. And it has potential to forge an alliance between socially liberal urban white voters and minority communities.

With a platform identified, we would need to decide on target geographies. All politics is local. It’s great to have support everywhere, but that’s unlikely to happen. This effort cannot succeed unless we can take control of weak, existing Republican infrastructure up to at least the county level. The weakness of the state party would be an important determinant of success. In places like Houston, Phoenix, Miami, and Atlanta there might be enough local support to make a hyphenated identity attractive, but extremists dominating the state party are powerful enough there to destroy such an effort before it reaches critical mass.

Baltimore, Hartford, Boston, Trenton, DC, and Newark share these important characteristics: Empty Republican infrastructure, failed Democratic leadership, and under-represented or poorly represented minority populations that are already well organized and politically active. Their state Republican leadership is too weak to stop an influx of new precinct leaders, even if that local leadership is hostile to the party’s status quo.

An initial core of Urban Republicans would recruit participants in the target geographies willing to fill vacant precinct leadership slots. In most of these geographies that process could be accomplished without any resistance. By doing little more than raising their hands they could take on local leadership roles in near-empty infrastructure.

A parallel effort would have to be launched to identify donors and establish a larger, less localized infrastructure. As described in more depth by this series of posts (linked), that effort would include recruiting pundits, building think tanks, and starting to solicit support from alienated Republicans nationally.

Out of a pool of local leadership calling themselves Urban Republicans we would begin to opportunistically pursue local elections. The initial focus should be on city, county and school board races. If an attractive opportunity rose to take a state legislative seat it should be pursued. However, recruits should be strongly discouraged from trying to take a Congressional seat before a critical mass of local races had been won.

A concentrated grassroots recruitment effort should precede high-profile moves like nominating Congressional candidates. Until the critical work is done at the grassroots candidates can’t change anything. The finest surfer in the world has never crafted a single wave. Elected officials don’t shape our political climate. They ride it. Effort has to be concentrated on building infrastructure or that effort will be wasted in high-profile elections.

More importantly, runs for high-profile office will attract resistance that could be fatal in the early stages. A solid base of local support will be critical to survival once resistance builds at higher levels of the party. Run a high profile, semi-successful Congressional campaign without building enough support for a wider effort, and established forces will cut us off at the knees before we can get on our feet. In the early stages this movement can only matter if it can force candidates to come to us.

Once the sub-party has assumed dominant influence in several urban areas and established some local electoral success, it will be ready to start influencing national politics. Within four to six years, Urban Republicans could be sending delegates to the Republican National Convention, still under their own rebel flag, and fielding successful candidates for Congress. With strong local organizations in specific geographies, the national party won’t be able to squash the effort. By then there might be half a dozen other similar efforts underway in both parties, creating enough internal dissent that a new bloc can effect cross-party coalitions to moderate Congressional politics.

Pragmatic, sensible Republicans, sometimes described as “moderates,” have always carried a crucial flaw. In a heated contest, you can count on them to remain above the fray, to assume an air of entitled superiority. They fail to show any passion, any commitment, any fight. And they lose. They have lost so often and so consistently that they only exist at the weakest margins of Republican politics. Nothing will change in the Republican Party until sane people get angry enough to fight.

Until enough good, smart, competent people are willing to invest their political capital on a new direction, until they are willing to take chances and fight, elections will change nothing. We need to raise a flag around which they can rally. If you’re tired of what’s coming out of our elections, then invest more thought, courage, and energy in shaping them.

Chris Ladd is a Texan in exile. After growing up in Beaumont and working for more than a decade in Houston, he moved to suburban Chicago, where he is a Republican precinct committeeman. He has a day job that he loves in the software industry. In his free time he has written for David Frum’s blog, the Washington Times Communities, the Houston Chronicle, and the Huffington Post. Back in Texas he interned at the Legislature, worked on numerous state and local Republican campaigns, and volunteered for a statewide PAC. Chris graduated from Beaumont’s Central High, earned a degree from Southwestern University in Georgetown, Texas (the Harvard of Williamson County) and received his JD from the University of Houston.

How the GOP will change after Trump →

Chris Ladd: All lives will matter →

Chris Ladd: Ending the era of the “job” →