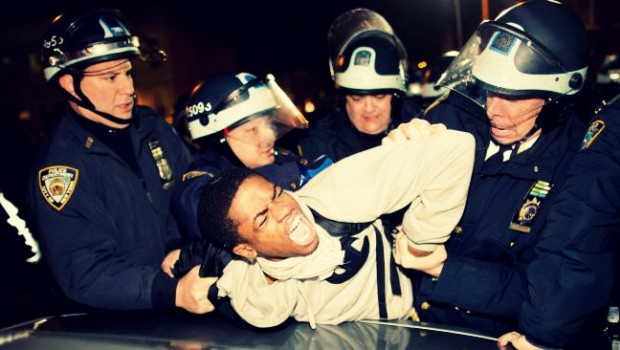 Perhaps the most insufferable chant that erupts whenever a police officer is caught red-handed in murderous violence or malpractice of any stripe is: “All Police Officers Aren’t Bad!” Curiously, however, we never hear similar arguments about black people whenever a black criminal captures the interest of the national media. Lamentably, black criminals are treated as ambassadors of black culture and are used as justifications for the existence and continuation of abusive policing. Despite the protestations of many who claim that cops face a barrage of calumny and an insurmountable degree of abuse from unappreciative citizens, there is no problem of reasonable people believing that all police officers are evil. There is, however, a problem of many people failing to condemn bad police officers, even when they are caught engaging in the most reprehensible and immoral behavior. There is a failure of people to recognize the insidious culture of the blue wall of silence—the idea that cops are not supposed to report their fellow officers when they see bad behavior.

Police are treated with such preposterous veneration in America that they are even considered exempt from critique by the sitting president of the United States. When, in July 2009, Sgt. James Crowley imprudently arrested black Harvard professor Henry Louis Gates outside of his own Cambridge, Massachusetts residence, President Obama correctly said that the officer acted stupidly. This led to crazed denunciations of Obama from the American right for even daring to question the conduct of a police officer—as if criticizing a police officer is tantamount to questioning a deity. The attacks that Obama received for making that remark demonstrates the unwillingness of some to admit that police officers are capable of wrongdoing where black citizens are concerned—even when that black citizen is one of the most celebrated black intellectuals in the nation. Shamefully, in order to be considered Constitution-loving patriots in the United States, black Americans are expected to smilingly surrender constitutional rights, gleefully embrace the inconveniences created by aggressive policing, and enjoy the barbarism of police brutality.

During Easter weekend, the holiest weekend of the year, Michael Slager, 33, a police officer in North Charleston, South Carolina, killed Walter Scott, 50, shooting him several times in the back while he was running away. The reason why this narrative was not disputed is because Feidin Santana, an eyewitness, had the good sense to pull out his cell phone and record the extrajudicial execution by the callous, murderous cop. Had Santana failed to film the execution, we would have been treated to the standard, predictable deluge of hackneyed, white supremacist anti-black lies about a hyper-aggressive, impossibly strong black male who was intent on grabbing the cop’s weapon and killing him.

Interestingly, before Santana came forward with the video footage, he had the wisdom to test the honesty of Michael Slager by giving him the space to offer his side of the story. When Slager lied to protect himself, Santana came forward with the irrefutably incriminating video evidence. This is important as it provides incontrovertible proof of the fact that, contrary to the infantile cops-are-always-right perspective of many who find themselves on the right side of the American political aisle, cops are very much capable of killing people in cold blood and lying about what they did in order to get away with murder. But for the video of the Walter Scott shooting, all of the lies of Slager would have stood as the official record of what happened. Moreover, given the propensity of many simpletons to unquestioningly believe anything on a document with an official government watermark, Slager’s narrative would have been relentlessly sung in unison by many, as though it were a hymnal at a Presbyterian Church.

Similarly, Freddie Gray, a 25-year-old black American Baltimorean, was killed via spinal injury which occurred while he was in police custody. Although what caused his fatal injury is currently inconclusive, the fact that it occurred while he was in police custody cannot be reasonably disputed inasmuch as video evidence showed his inability to stand on his own two feet once police apprehended him. (Freddie Gray had been running from the police prior to that point in the video.) Police officers in the United States kill American citizens in devilishly assorted ways. Whether by gun or by strategic injuries that are later said to be “accidental,” extrajudicial killings are deeply morally reprehensible and demonstrate a casual disregard for human life.

Curiously, culture is never considered as an important element worthy of exploration when discussing why police brutality and abuse of power occurs, but culture is unremittingly cited as a reason to oppose black people and defend the dehumanization of the black race. When a cop savagely shoots a black man dead and people have the audacity to talk about the dead victim’s struggle to stay current with his child support payments, it provides evidence for the claim that black pathology is a much-used rhetorical device and there is societal insouciance vis-à-vis being serious about combating the plague of police brutality. If American police officers are as virtuous as some claim and as vociferously opposed to people like Michael Slager, where are the prominent police groups speaking out against him and his murderous evil? Where are the police groups speaking out against the officers who participated in the death of Freddie Gray? What we need is a discussion of how police culture—specifically, the blue wall of silence—encourages the complicity of even ostensibly good officers in the most heinous acts of violence.

Despite the fact that police are unjustifiably placed on pedestals and treated as if they are so far above lowly blacks in inner cities, the truth of the matter is that police culture mirrors the worst of underclass black gang culture. The closest cousin to the concept of the blue wall of silence is the “no snitching” rule that is adhered to by those in street gangs. The difference between police officers and people in street gangs, however, is that we expect moral depravity and criminal allegiance from people in gangs. They are doing what criminals are supposed to do: demonstrate strikingly low morality. Gang members are not specially handpicked to go through police academies and take oaths vowing to protect and serve communities. Police officers, by contrast, are supposed to uphold the law and be among the most upstanding people within society. The fact that criminal fidelity is the common denominator in both street gangs and the people who are supposed to be uniquely morally equipped to fight street gangs is something that must be addressed. However, too many prefer glossing over the serious issues in American policing and defending the most indefensible behavior from officers. Much in the way that cultural appropriation works by making black cultural facets repulsive and reprehensible on blacks but chic and adorable on non-black people, glaringly immoral behavior from police officers is ignored (and sometimes even celebrated), whereas blacks receive endless artificial moral indignation for the exact same behavior exhibited by police officers.

Police corruption and abuse of black citizens of the United States is the logical extension of the continual attempt to paint black Americans as a congenitally criminal race and American police officers as saintly celestial beings incapable of maleficence. The fictitious chasm created by those who present black citizens as irredeemably bad and police officers as unquestionably good is integral to making any cock-and-bull story told about a black suspect by an officer instantly believable by many in broader society. This is the reason why America struggles to punish even the most glaringly guilty police officers. It is the reason why the police officer who killed Rekia Boyd is walking free after shooting her in the head. It is the reason why the police officer who killed Eric Garner by strangulation on video is walking free. Corrupt officers take advantage of the racist myths perpetuated about blacks throughout society and use them to paint innocent blacks as beastly violent criminals in order to cover their corrupt, unconstitutional dealings with black citizens.

If people are serious about exculpating cops from what they feel is the calumny that they are all bad people, then police departments across the country need to do a better job of keeping bad apples out and making sure they get rid of the few who make it into the policing fold. There needs to be a robust denunciation of the blue wall of silence, which encourages ostensibly good cops to remain silent in the face of murderous barbarism and injustice. As long as the systemic issue of the blue wall of silence remains a fact of American policing, it makes little sense to ignore culture and keep insisting that all police officers aren’t bad. Good police officers need to be disentangled from the same brush as bad police officers, and these good officers need to be free to call out those officers who contravene basic morals and act as enemies of justice. Those who stay silent when bad cops are caught engaging in extrajudicial assassinations are complicit in police brutality and abusive anti-black policing. All cops are not bad, but neither are all blacks. It is the belief that black people are uniquely and intrinsically bad that permits the flourishing of bad cops.

One Response to Chidike Okeem: Are Police Officers Gangsters?