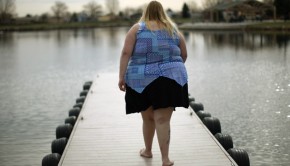 Obesity in America: To Win, We Have to Lose Government

Can the government make you lose weight? Officials sure think so. In May 2012, an HBO documentary and a Washington