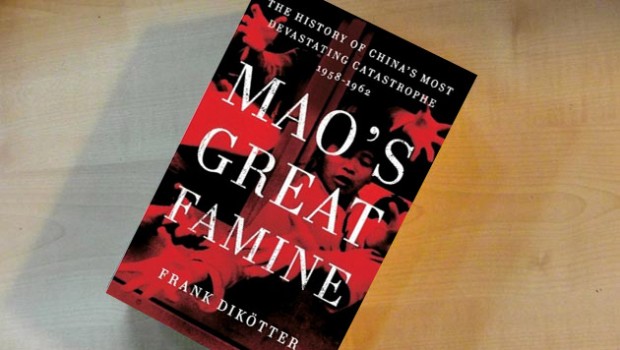 In an effort to better understand the mindset of those who espouse compulsory collectivism, I recently picked up “Mao’s Great Famine” by Frank Dikötter, Chair Professor of Humanities at the University of Hong Kong and Professor of the Modern History of China on leave from the University of London. The book is roughly 448 pages, and fairly new (printed September of last year).

In the book, Dikötter takes great stride to expose the horrific reality behind one of China’s most devastating periods known as the Great Leap Forward, not by second-hand accounts, but rather statistics compiled by the architect himself, Mao Zedong. In fact, Dikötter’s sources stem from thousands of People’s Republic of China (PRC) documents made available by the Ministry of Foreign Affairs in Beijing, along with other large provincial collections taken from Hebei, Shandong, and Gansu. And while Dikötter’s book does touch briefly on the years leading up to Mao’s infamous Great Leap Forward, the bulk of information primary centers on the years between 1958 and 1962, when the Great Leap Forward was in full swing.

As Dikötter points out, Mao’s obsession to surpass Britain in economic production “within fifteen years” played a key role in spawning the Great Leap Forward and, in many respects, was a direct result of Mao’s years of disillusionment with playing second-fiddle to Russia’s Joseph Stalin and Nikita Khrushchev. In essence, Mao desired for China to become a respected military and economic power.

One of Mao’s most ambitious goals during the Great Leap Forward was to create a new massive water-conservancy program which would serve to irrigate as much land as possible by essentially creating a new highly complex “water-highway” that spanned across whole towns and mountains. During this period, more than 30 million people (1 in 6 Chinese) were made to work and dig in the countryside, eventually resulting in more than 2,400 deaths by 1962, when the project was abandoned altogether.

During this same period, pots and pans were confiscated and melted in order to increase China’s steel output. Livestock was also confiscated, and roughly 40 percent of all homes were pulled down in order to create canteens and straighter roads, subsequently leaving thousands of people to wander and fend for themselves. Many took refuge in caves, while others simply froze or starved to death.

According to Dikötter’s estimates, the total loss of life under Mao Zedong’s Great Leap Forward is somewhere around 45 million (original estimates ranged between 15 and 32 million deaths). And though much peril can indeed be attributed to famine, Dikötter concludes through PRC party documents that roughly 2.5 million deaths (6 to 8 percent of total deaths) can in fact be attributed directly to murder and torture, fundamentally proving that much of China’s suffering was not “an unattended consequence of half-baked and poorly executed economic programs” as some may describe it, but rather a vicious and selfish systematic despotism executed by a megalomaniac under the guise of “radical collectivism” and Chinese nationalism.

It would be impossible for me to cover every aspect of Mao’s Great Leap Forward or the economic devastation that ironically ensued in such a limited amount of space, but for those interested in a well thought out, detailed and statistically backed account of the turbulent, heartbreaking years that plagued an otherwise beautiful people between 1958 and 1962, Dikötter’s portrayal is superb. And while he may not leave much guessing as to where he personally stands on Mao Zedong as a ruler — numbers and statistics don’t lie, and Dikötter rarely, if at all, imposes himself as an author without supporting evidence.

Overall, “Mao’s Great Famine: The History of China’s Most Devastating Catastrophe, 1958-1962” is a great read for political, economic and history students alike, and is loaded with hard statistical data deriving from a wealth of sources, all neatly organized and cited in bibliographical format at the back of the book. And though the book, despite its long length, only covers 4 years of a country that arguably spans thousands of years, there are indeed a number of very worthwhile lessons to be taken from this brief, but tragic period.

About the Author: Brandon Loran Maxwell is an essayist; political analyst; satirist; playwright; and journalist. He has been published in various local and national publications, including: The Hill, The Washington Examiner, and UtahPolicy.com. In addition, he has been personally profiled in a number of other publications and has been a guest on various news programs. In 2009, he spoke on judicial reform alongside then Congressman Wu. He is a winner of Portland, Oregon’s One Act Festival; a coordinator for Students For Liberty; and a political science and film studies undergraduate.

Video of Frank Dikotter discussing his book, “Mao’s Great Famine: The History of China’s Most Devastating Catastrophe, 1958-1962,” presented by Harvard Book Store. “Between 1958 and 1962, China descended into hell.