Australia: change when change is required

Greg Sheridan, When We Were Young And Foolish: A Memoir of My Misguided Youth with Tony Abbott, Bob Carr, Malcolm Turnbull, Kevin Rudd and Other Reprobates, Sydney, Allen and Unwin, 2015

It’s often said that many young Australians find public debate bitter and lacking in civility. Greg Sheridan’s When We Were Young And Foolish, however, gives some perspective on the political currents of past generations, which make today’s social landscape appear mild by comparison.

Although Sheridan looks at the political elites of Australian politics he actually devotes more time to exploring the political landscape where they cut their teeth: the Catholic-Protestant divide, Labor’s split over communism and the venom of student and union politics. These, thankfully, are cleavages no longer dividing Australian life.

‘For more than 150 years,’ Sheridan writes, ‘Catholic versus Protestant was the key divide of our nation.’ Some newspaper job advertisements, as late as the 1960s, even confronted Catholics that they needn’t apply. Marrying across the ‘divide’ was enough to split families, as Sheridan’s own experience as a young Sydney-sider attests, and professions could be divided along denominational lines. Despite talk of inequality, ‘ceilings’ and discrimination young Australians can be thankful that career and social life is no longer led by what type of Christianity they follow.

Communism is another seismic international and domestic force that young Australians will find hard to appreciate. ‘I didn’t want my government supporting a communist victory in Vietnam,’ reflects Sheridan on Australia’s involvement in the Vietnam War, ‘because everywhere the communists won in the twentieth century they brought re-education camps, gulags, dictatorship, oppression and economic misery.’

It’s puzzling why so many Australians not only cheered for a communist win in Vietnam but how such a depraved ideology achieved support among Australian political parties and unions. The Communist Party of Australia, writes Sheridan, ‘seldom took a position at odds with Moscow’ while the Socialist Party of Australia ‘slavishly followed the Soviet line on everything.’ Both parties, rather than being fringe political dwellers, possessed control of significant unions. Communist support within the Labor Party, in fact, contributed to the great 1955 Labor Split and the formation of the (anti-Communist) Democratic Labor Party.

Another stark contrast from today is the influence and scale of student politics. Between the 1960s and 1980s the student political movement in Australia could flex significant influence on politicians while, at the same time, promoting some outrageous positions. For a period the Australian Union of Students, for example, had a policy that all ‘men’ – apparently any boy aged over seven – were complicit in the crime of rape. Julia Gillard was the final AUS President before, mercifully, the union was disbanded in 1983.

Tangling sharply against these kinds of ideas was a young Tony Abbott who, as a student, seemed under constant threat from radical university peers (practically anyone involved in student politics). On one occasion, while protecting a female friend with shared centre-right sympathies, Abbott was severely beaten. ‘He was politically incorrect,’ reflects Sheridan, ‘and took positions, mild enough in mainstream Australia but completely outrageous in the world of student politics, which they hated.’

When We Were Young and Foolish also recalls an era of pervasive union influence, bitter commercial disputes and compulsory unionism. While CFMEU flags at CBD construction sites and Labor Party politics suggest a degree of union prevalence the dynamics are nothing like the 1960s and 1970s. The need for unions in Australia has obviously abated in an economy now driven by small business with a decline in manufacturing and the need for more flexible labour.

Many of the anti-Abbott crowd will no doubt scan the pages of When We Were Young and Foolish looking for ‘dirt’ or misgivings of the now former prime minister. What they’ll find, however, is a neat account of a young Australian deeply devoted to the intersection of ideas and action. ‘Tony is a paradox,’ writes Sheridan of his best friend, ‘in that his nature is essentially action-oriented, but he also cares about ideas for their own sake.’ While a young Abbott espoused a ‘serious, reflective, questioning, intellectual side’ he was also a keen boxer and rugby player – inspiring traits for young men.

Ironically the constant needling that wedged Abbott from power is a simple reflection of his student days. There are many that simply begged for his government to fail in efforts to end boats, pay off debt, stop waste and take steps to reform the federation. Although Abbott may have departed the prime ministership Sheridan shows that he has always been a survivor with great depth – a seasoned political thinker, unbowed by white noise and political correctness.

The provincial nature of past Australian politics does not mean today’s public discussion should be bitter and uncivil. But it does show how far Australia, like any decent nation, can evolve and re-invent in the interests of social cohesion: a broad lesson that today’s young Australians, like a youthful Greg Sheridan or Tony Abbott, should take time to acknowledge and explore. 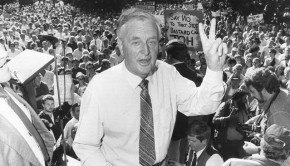 Sean Jacobs : Standing up for Conservatism in Queensland, Australia →

One Response to Australia: change when change is required